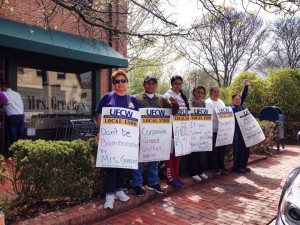 A NLRB Regional Director found merit to the ULP filed by UFCW Local 1500 that eight Mrs. Green’s Natural Market workers were illegally fired for trying to have a union voice on the job.

After an internal investigation by a Regional Director of the National Labor Relations Board (NLRB), the Director found merit to UFCW Local 1500’s unfair labor practice charges alleging that Mrs. Green’s Natural Market unlawfully terminated eight employees because they supported having a union voice on the job.

The Regional Director also revoked a previous settlement of unfair labor practices (November 2013) between UFCW Local 1500, the NLRB, and Mrs. Green’s. In that settlement, Mrs. Green’s agreed to cease their anti-union conduct, promising to create a safe, intimidation-free work environment for the workers. The company also agreed to post a notice in their store for 60 days that informed all employees of their basic rights at work, including the right to form and organize a union.

In a complete disrespect for the settlement with the government and workers’ rights, during a one week span in January, Mrs. Green’s abruptly fired eight leading union supporters, some of whom had met with local politicians about their campaign. The company then removed the required notice from the walls of their store prior to the end of the 60-day period.

A Federal Labor Complaint was then issued against Mrs. Green’s, alleging that Mrs. Green’s violated the law when it terminated union supporters. The trial will be heard before an Administrative Law Judge of the NLRB in July.

“We’re confident that we will receive justice,” said David Ramirez who worked at Mrs. Green’s in Mt. Kisco, New York, for nearly ten years until he was fired this January, “We could not have gotten this far and received this decision without the support from UFCW Local 1500 members and the Mt. Kisco community, who have walked the picket line with us during a cold winter. That meant a lot to all of us and gave us support and energy to continue to hold strong and fight for our rights,” said Ramirez.

UFCW Local 1500 is urging the company to reinstate all unlawfully fired workers. Since January, the fired workers have received an outpouring of support from community and politicians who have called for a boycott of the store. The picket line remains up at 666 Lexington Ave. Mt. Kisco, NY. Last week, days after the federal complaint was issued and after 18 months on the job, Mrs. Green’s parent company, Natural Market Food Group CEO Robin Michel was ousted.

Updates on the workers and the case can be found at ufcw1500.org/greenismean.