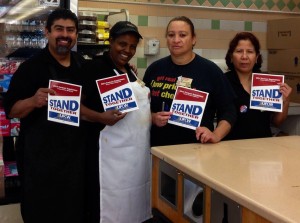 More than 60,000 UFCW grocery workers in Southern California have reached a tentative contract agreement with Ralph’s,
Albertsons, and Vons.

The agreement was reached after four months of negotiations. Workers from across Southern California took action to show their solidarity and earn the support of their customers by wearing “Stand Together” buttons at work.

UFCW members from across the region will vote on the proposal in meetings scheduled over the coming weeks. Details of the agreement will not be released until members have had an opportunity to read, discuss, and vote on the tentative agreement.

The current contract expired in early March, and workers are currently on a day-to-day extension. Private hedge fund Cerberus, which owns Albertsons, recently made a tentative purchase of Safeway, the corporation that owns Vons and Pavilions. That sale could take as long as a year to finalize because it is subject to Federal anti-trust approval. OP