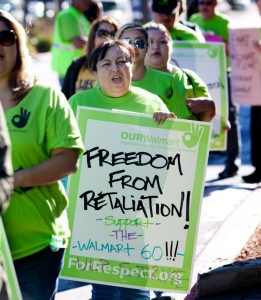 The NLRB is prosecuting Walmart for violating labor law when it fired and
disciplined nearly 70 workers.

The National Labor Relations Board (NLRB) is prosecuting Walmart for violating labor law (The National Labor Relations Act), when Walmart fired and disciplined nearly 70 workers, including those who went on strike over Walmart’s retaliatory practices and shared their concerns with shareholders at the company’s annual meeting last year. If Walmart is found liable, workers could be awarded back pay, reinstatement and the reversal of disciplinary actions, and Walmart could be required to inform and educate all employees of their legally protected rights.

The hearing begins as OUR Walmart members make significant strides in changing policies of the country’s largest employer. Recently, Walmart upgraded its pregnancy policy after OUR Walmart members who are also shareholders submitted a resolution to the company about its discriminatory pregnancy policy. And, responding to OUR Walmart members’ growing calls on the retailer to improve access to hours, Walmart rolled out a new system nationwide that allows workers to sign up for open shifts in their stores online.
“After I went out on strike to end illegal retaliation against workers, spoke out for more hours to help make ends meet, and helped to ensure women at Walmart are accommodated during their pregnancies, Walmart fired me. The Labor Board’s trial against Walmart confirms that Walmart is not above the law,” said fired Walmart Tiffany Beroid of Laurel, Md.

As OUR Walmart gains momentum and tens of thousands of Americans are joining the call for the company to improve jobs, the NLRB asserts activities in 14 states at 34 stores violated the National Labor Relations Act and alleges that company executives conceived—and oversaw implementation—of an unlawful retaliation policy for store managers to execute. The NLRB complaint—the largest ever against Walmart in both size and scale—names 63 individual store managers and company spokesperson and vice president of communication David Tovar as being responsible for illegal threats made to employees.

The complaint addresses threats by managers and the company’s national spokesperson for discouraging workers from striking and for taking illegal disciplinary actions against workers who were on legally protected strikes.

While historic, the complaint alone is not enough to stop Walmart from violating the law. Since the start of the year, Walmart has continued to retaliate against workers who speak out for better jobs. The trial against Walmart may last several months and include hearings and testimony from workers in five or more cities. OP