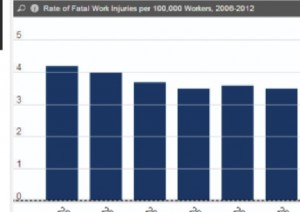 The AFL-CIO released the 2014 edition of “Death on the Job: The Toll of Neglect,” a report on worker safety and health issues.

The AFL-CIO released the latest edition of Death on the Job: The Toll of Neglect, a national report with a state-by-state profile of worker safety and health issues in the U.S.
Some findings of the report include:

The full report can be read at http://bit.ly/1mSdOX7 and a breakdown of report highlights with graphs can be found at aflcio.org/death-on-the-job.