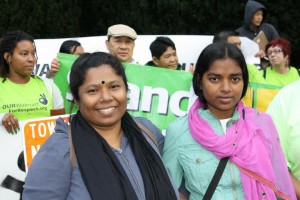 Jobs With Justice coalition members delivered letters to store managers calling on Walmart to compensate injured workers and their families, sign the safety Accord, and respond to the concerns of workers throughout its supply chain.

On April 24th last year, garment workers in a Bangladeshi factory were reassured that the cracks that had appeared in the walls the previous day where they were working had been repaired. Just an hour later, the building collapsed, killing 1,138 people and injuring at least 2,500. Two of the factories in the building have been linked to production of Walmart goods.

One year after this tragedy, Walmart has still refused to sign on to the Accord on Fire and Building Safety in Bangladesh. Instead, the company has promoted its own alternative which lacks enforcement mechanisms or meaningful worker input.

Workers and organizations will be holding a week of action calling on Walmart to finally address issues in its supply chain and sign the Accord. UNI Global will hold events across four continents on April 24th, and students and activists across the country will take action through United Students Against Sweatshops and the International Labor Rights Forum. Locals wanting to participate in the actions to be held on April 24th at Walmart stores and Walmart offices can find more information at http://bit.ly/RanaActionInfo.

Jobs With Justice coalition members will also deliver letters to store managers across the country calling on Walmart to compensate the injured workers and their families, sign the Accord, and hear the concerns of workers throughout its supply chain.

In June of 2013, Making Change at Walmart supporters generously raised funds to bring former garment worker and Bangladeshi labor activist Kalpona Akter to speak at Walmart’s shareholders meeting. Despite a history fraught with the violent suppression of labor activists in the Bangladeshi garment industry, Akter challenged Walmart to provide safer work facilities and more oversight in their supply chain. Her shareholder proposal was voted down by shareholders – a majority of those shares belong to the Walton family.

The International Labor Rights Forum also released an in-depth report on the tragedies in the Bangladeshi garment factories. The report can be read at http://bit.ly/WaitingReport.