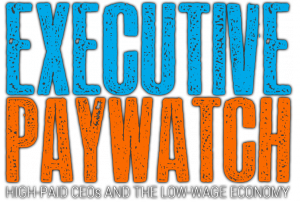 The AFL-CIO 2014 Executive PayWatch report shows that the U.S. CEOs were paid 331 times more than the average worker.

Today, the AFL-CIO unveiled the 2014 Executive PayWatch report. According to the data, U.S. CEOs pocketed, on average, $11.7 million in 2013 compared to the average worker who earned $35,293. That means CEOs were paid 331 times that of the average worker.

“CEO Executive PayWatch calls attention to the insane level of compensation for CEOs, while the workers who create those corporate profits struggle for enough money to take care of the basics,” said AFL-CIO President Richard Trumka. “This database is relevant to every community in the country. And we’ll use this data to organize and mobilize to lift millions of workers out of poverty and to strengthen the middle class,” said Trumka.

PayWatch can be found at http://bit.ly/PayWatch2014. PayWatch is a comprehensive searchable online database tracking the excessive pay of CEOs of the nation’s largest companies.