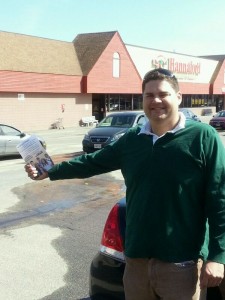 In an on-going effort, UFCW Locals 328, 371, 919, 1445, and 1458, Region 1 and the Rhode Island chapter of Jobs with Justice are cooperating in an multi-state outreach effort to non-union retail workers in their area. For two weeks now, stewards, board members, local staff, and community allies have been talking to workers about the difference being a part of a union makes in their lives. As a starting point, the group is handing out flyers addressing the recent pay raises thousands of UFCW members at Stop & Shop received as part of their new contract.

Activists had hundreds of conversations with workers at more than 50 stores across New England, including well-known non-union chains like PriceRite and Hannaford Brothers.