Walmart Workers and Allies Hold Panel on Inequality in America 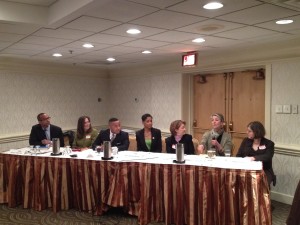 The State of Inequality in America panel held in Washington, D.C., had Walmart workers and community allies discuss the growing gap between the rich and poor in America.

Recently, 20 Walmart workers and their allies attended The State of Inequality in America panel discussion in Washington, D.C. The panelists discussed the growing gap between rich and poor in America, developed strategies to overcome the narrative that poverty is deserved, and pointed to worker action as the single strongest way to address the challenges facing working people. The panel also helped kick off a full-day Making Change at Walmart strategy meeting the following day.

The panelists agreed that the courage of low-wage workers has created an opportunity for change this year. As workers flanked the stage at the closing of the panel, one panelist told the group, “Walmart workers are leading this movement and that changes what’s possible.”

Over the course of the last two years, workers throughout the U.S. have been protesting, striking, and standing up for justice. Their actions have exposed a crisis of income inequality in America today.

Workers and their communities are increasingly frustrated that the profits they generate through hard work are enriching Wall Street and corporations – the largest among them Walmart – while working people face poverty and economic insecurity.