OUR Walmart Members and 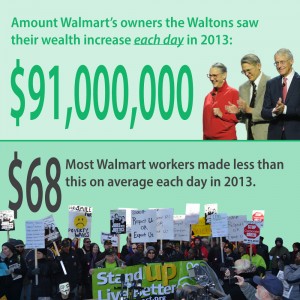 OUR Walmart and Making Change at Walmart
campaigns highlighted in the media as workers push for better jobs and working conditions.

Since its inception, former and current Walmart workers who are members of OUR Walmart have called on the retailer to publicly commit to raising wages and increasing access to full-time hours. OUR Walmart members have also asked the retailer to stop its practice of retaliating against workers who are simply exercising their right to speak out for a better life and improved working conditions. Over the course of the last few weeks, OUR Walmart members, Making Change at Walmart, and campaign allies have had some great stories in the news.

Along with reading and sharing the articles, local unions can continue to support Walmart workers by downloading and sharing campaign infographics found on the Making Change at Walmart Facebook page at https://www.facebook.com/MakingChangeWMT.