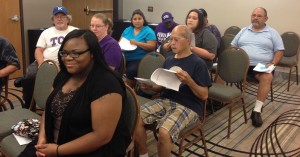 Local 1000 members at TCU discuss their new contract with Sodexo

On July 15, more than150 Sodexo USA campus food workers at Texas Christian University (TCU) in Fort Worth, Texas, voted unanimously to ratify their first union contract with UFCW Local 1000. The contract is a victory for the workers and guarantees new wage increases, job security, seniority rights, vacation and sick pay, and other union protections. The contract also restores many of the benefits cut by the company last year. The workers approached UFCW Local 1000 earlier this year with complaints of severe cuts to their benefits, vacations, and hourly schedules, which prompted their desire to form a union.

“It was so inspiring to see these workers bargain their first contract,” UFCW Local 1000 Secretary-Treasurer Casey Williams said. “It was an honor to sit down next to them at the negotiating table and fight for their seniority, vacations, and raises.”

“The UFCW did a great job,” said Roy Papajohn, a Sodexo worker and UFCW negotiating committeeman. “The talks were civil and professional. It was a learning experience. Both sides were tough in the bargaining, but we were able to find middle ground on areas of disagreement. I feel we reached a fair agreement and TCU workers are happy with the final outcome.”

Sodexo is a French food services and facilities management company. It is a multinational corporation with U.S. headquarters in Maryland.