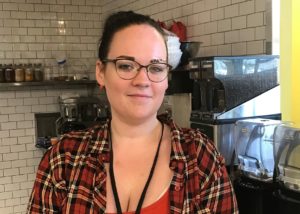 Region 7 has been growing our union family in Washington state. Recently, workers from the Central Co-op and Fred Meyer joined UFCW Locals 367 and 1439.

In July, the Central Co-op opened a new location in Tacoma, Wash., as their second store in the Puget Sound area. The co-op’s managers originally refused access to union representatives from UFCW Local 367. To help UFCW Local 367 gain access to their coworkers, Seattle Central Co-op workers represented by UFCW Local 21 worked with Region 7 to launch a sticker action and engaged community groups to send emails to Central Co-op’s CEO.

“I am 100 percent for the union,” said Taylor Julian, who works at the Central Co-op in Tacoma. “I want to see everyone earn a living wage, have job security and equal pay for equal work.” 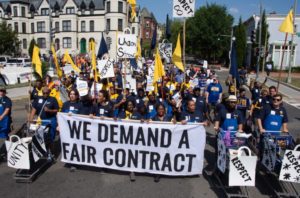 Hundreds of Local 400 members who work at Giant and Safeway grocery stores rallied in Washington, D.C., on Sept 12 for fair contracts the day before the start of negotiations on a new union contract.

“We’re letting Giant and Safeway know that it’s time to share the success our members make possible,” said UFCW Local 400 President Mark P. Federici. “We expect living wages so no one has to be on food stamps to feed their families. We expect better hours, scheduling predictability and more full-time jobs. We expect continued health and retirement security. We’re all here as one voice. One voice to call for fairness and decency. And when all of us stand together, we can’t lose!”

Michelle Lee, who works at Safeway #1283 in Alexandria, Va., reminded management that the human touch provided by UFCW Local 400 members is the key to customer loyalty and the company’s success.

“We know our customers, we love our customers, they love us,” Lee added. “We know what type of coffee they want. We know how they want their meat sliced. We know whether they want ham or pork or pimento cheese or Swiss cheese. Our customers know that we care about them and that’s why they shop at Safeway.”

“We know what we want,” said Jane St. Louis, who works at Safeway #2794 in Damascus, Md., and serves on the Bargaining Committee and the UFCW Local 400 Executive Board. “Now, we hope Giant and Safeway know what we want. Because all of us are strong and we have a lot of strength in our faith, we have a lot of strength in our work ethic and our ability, and they won’t know what hit them if they don’t come to the table and listen to what we have to say.”

The current collective bargaining agreements between Local 400 and Giant and Safeway expire on October 31.