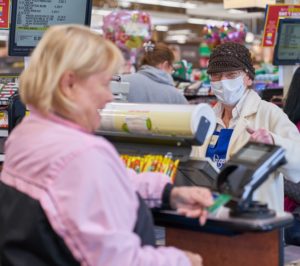 Last week, the UFCW condemned the announcement by Kroger that the company repurchased $211 million in shares this past quarter and has authorized an additional $1 billion in stock buybacks. This announcement came just weeks after the company cut hazard pay for its more than 450,000 grocery workers still on the frontlines of the COVID-19 pandemic. Kroger joins a growing list of companies, including Dollar General and Big Lots, that have announced stock buybacks after hazard pay cuts were imposed on grocery and retail workers across the country.

“It is stunning that in the middle of the worst pandemic in a century, Kroger and other top grocery and retail chains are eliminating hazard pay for their essential workers, but can somehow find hundreds of millions of dollars for stock buybacks,” said UFCW International President Marc Perrone. “Asking these workers to put their lives on the line every day, working without hazard pay, while shareholders continue to benefit from stock buybacks, is just wrong.

“This pandemic is real and grows every day, and the reality is that multimillion-dollar stock buybacks don’t benefit frontline workers and they certainly don’t protect them and their families from the ongoing risk of being infected with COVID-19,” Perrone added. “The American people, our elected leaders, and customers expect better, especially when companies like Kroger are raking in over $2 billion in profit since the pandemic began.”