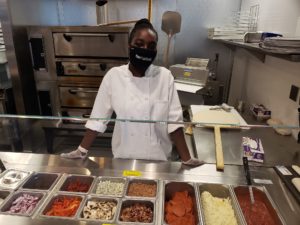 Apraisjah Gee, who works as a pizza and deli helper clerk at PCC Community Markets in Seattle, is excited to be a member of UFCW Local 21.

Over 200 grocery store workers at Metropolitan Market and PCC Community Markets in Washington recently joined UFCW Local 21 for the better wages and benefits that come with being a member of our union family.

The workers, who are employed at Metropolitan Market in Mercer Island and PCC Community Markets in Seattle, joined UFCW Local 21 because they wanted the same benefits as their unionized colleagues at the stores. This organizing win is part of UFCW Local 21’s New Seasons Market campaign, a four-year effort by the local and community partners in the Good Jobs Coalition to support workers challenging New Season Market’s use of union-busting consultants, punitive attendance policy, management favoritism, and disparate discipline. UFCW Local 21 and community partners also challenged the company’s ties to an investor with a history of funding extreme anti-LGBTQ+ and anti-women’s rights groups, as well as its complicity in gentrification and displacement in the historically African American Central District neighborhood in Seattle.

“I experienced racism and discrimination on the job. I wanted to be treated better,” said Apraisjah Gee, who works as a pizza and deli helper clerk at PCC Community Markets in Seattle. “I’m excited to now be working at PCC in the Central District since I grew up here in this community my entire life! This is my home and I love that I’m working at a UFCW Local 21 represented store. I already see the union difference. It feels like family.”