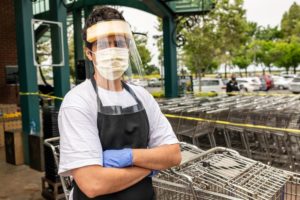 UFCW International President Marc Perrone and U.S. Senator Kamala Harris (Calif.) called on the CEOs of the country’s largest grocery store chains to reinstate hazard pay in a CNN op-ed published on August 7. The op-ed is part of the UFCW’s national campaign to restore hazard pay for frontline workers as COVID-19 cases continue to climb nationwide.

Excerpts from the CNN op-ed are as follows:

Grocery store workers are putting their lives on the line every day that they walk into the store. This pandemic is far from over and the health threats that grocery workers face are just as real now as they were when this crisis began.

Given the seriousness of this pandemic, and the essential jobs they do, the time has come to reinstate hazard pay for all of America’s grocery workers. For these brave men and women who continue to be on the frontlines of this crisis, our country should demand nothing less.

The UFCW has been a national leader in the effort to strengthen protections and support for America’s 3 million grocery workers and other frontline workers during the pandemic. On July 17, the UFCW held a national press conference with U.S. Senators Sherrod Brown (Ohio) and Elizabeth Warren (Mass.), to pressure top grocery and retail companies to reinstate hazard pay. During the press conference, Senators Brown and Warren talked about a letter they led with Senate Democrats, including Senator Harris, which called on major grocery store CEOs to restore pandemic pay and implement CDC recommendations for workplace safety for the duration of the pandemic.

You can read the full text of the CNN op-ed here.