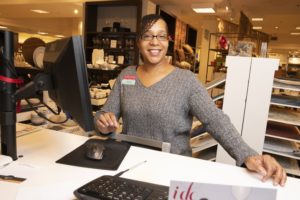 The Secure Scheduling ordinance, which went into effect on July 1, 2017, requires large retail and food-service businesses to post workers’ schedules two weeks in advance, compensate workers for employer-requested schedule changes, and offer additional work hours to current employees before hiring new people. As a result of this ordinance and the work of UFCW Local 21 members to enforce the law by documenting their schedules and hours, Macy’s owes back pay and damages to 803 employees who worked in Seattle stores between July 1, 2017, and February 24, 2020. Workers will receive about $2,500 on average, with some receiving upward of $10,000. Macy’s closed its two Seattle locations in 2019 and early 2020.

Susan Hedman, a UFCW Local 21 shop steward who worked at the downtown Seattle Macy’s for more than 30 years, played a role in helping to win the settlement. She encouraged coworkers to track their schedules and hours after noticing a discrepancy between the city’s scheduling law and the treatment she was experiencing at work, especially when it came to the premium pay she was supposed to earn for last-minute schedule changes.

“When I first reported scheduling issues, I was just hoping that Macy’s would have to follow the law like everybody else,” said Hedman. “The fact that our settlement turned out to be the biggest one in OLS history is beyond my wildest dreams.”

“I noticed something with my schedule that didn’t feel right, so I started documenting what was happening and I went to my union,” added Hedman. “It took some effort, but it was pretty easy to keep track of the violations. It’s not enough to have strong labor laws on the books—we need to enforce them. Strong city enforcement, coupled with the backing of my union, helped me and my coworkers get what we deserved.”

“We hope this sends a strong message to employers, especially retail employers in Seattle, that you cannot break the law and expect no consequences,” said UFCW Local 21 Secretary-Treasurer Joe Mizrahi. “UFCW 21 members and other workers in Seattle fought hard to both pass strong workers’ rights laws and adequately fund the office that enforces these laws. This historic outcome is what happens when we have elected officials who prioritize workers over corporations, and we appreciate the continued leadership of our city council and the hard work of OLS investigators.”