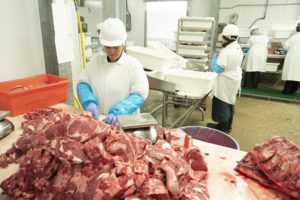 Last week, the UFCW condemned a new U.S. Department of Homeland Security (DHS) policy that removes H-2B program limitations for workers who are deemed essential to the food supply chain during the coronavirus outbreak. The H-2B program permits employers to hire foreign workers to come temporarily to the United States and perform temporary nonagricultural labor or services. The new DHS Temporary Final Rule will make it easier for companies to eliminate American jobs and replace current employees with guest workers.

The new DHS policy follows an effort by the National Pork Producers Council this March to pressure members of Congress and other U.S. Government officials to allow pork producers to hire more guest workers who would displace the hard-working Americans keeping these plants running.

“America’s brave meatpacking workers are not replaceable. They are putting their lives on the line every day, with dozens dying and over 10,000 infected, to make sure millions of Americans have the food they need during this deadly outbreak,” said UFCW International President Marc Perrone in a statement.

“When the Trump Administration forced meatpacking plants to reopen, but failed to enforce the strong safety standards needed, it put more American workers at risk,” Perrone said. “This new policy is a betrayal of America’s meatpacking workers, giving companies a free pass to ignore safety and push anyone who gets sick out of a job by replacing them with untrained guest workers.”

“America’s food supply depends on our country’s meatpacking workers who have the skills and training needed to keep our food supply chain strong during this pandemic. An American president should be protecting American jobs and the food workers who are keeping our country running, not replacing them or exploiting this crisis to further enrich meatpacking companies. At a time when our economy is spiraling and our food supply is already under pressure, this decision is a direct threat to workers and represents a clear and present danger to public health and safety. Our country’s leaders – both Republicans and Democrats – must reject this move and stand up for the American workers helping to feed our families during this crisis.”