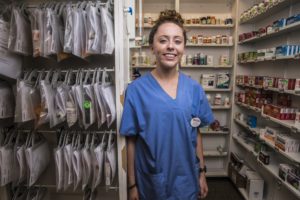 Albertsons Pharmacy Technicians in Casper, Wyo., joined UFCW Local 7 through an Armour-Globe election on March 26 for the benefits that come with a union contract. The six pharmacy technicians wanted the same union contractual protections and benefits that their colleagues in the unionized retail and meat departments have, including union health care and pension benefits.

The election was conducted by mail and the ballots were counted via FaceTime by an NLRB agent.

“This was a great organizing success due to the fact that the election was conducted by mail, which is very rare for the NLRB,” said UFCW Local 7 Organizing Director Randy Tiffey. “Due to the pandemic, the NLRB decided to go forward with the counting of the ballots via FaceTime, which was definitely outside of the norm.”

“We have filed for another election of pharmacy techs with another employer, but the employer is forcing a hearing,” Tiffey added. “But the NLRB has postponed all hearings due to the COVID-19 outbreak. However, with the help of our legal team, we sent letters to the NLRB asking them to proceed with the hearing via teleconference or video conference or as an alternative, the employer cannot conduct any meetings or campaign until after the representation hearing is conducted. We just heard that the NLRB has decided to proceed with a teleconference hearing as a result of many unions, including ours, pushing for this. We’re glad to see the NLRB move forward with technology.”