Kroger Workers Across the Country Stand Together for Strong Contracts 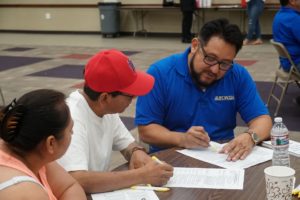 In the past year, more than 150,000 Kroger workers represented by UFCW locals across the country stood together to achieve the strong contracts they have earned and deserve. They were part of the more than 450,000 total UFCW members who negotiated better contracts in 2019. Through strong coordination, these members set a powerful example of what our members and locals can achieve when it comes to bargaining with some of our top employers in the U.S.

Here are highlights from the UFCW locals and members who achieved these victories.

On Jan. 9, more than 7,000 members of UFCW Local 1529 who work at Kroger stores in Tennessee, Mississippi and Arkansas ratified a new contract that raises wages and improves benefits.

The new agreement includes wage increases across the board, protects current health insurance plans, and improves accident and sickness benefits.

“Change is good and the new changes in the contract were important to me because they will help ensure a strong future for our workplace rights and welfare,” said David T., a Kroger worker and a member of UFCW Local 1529. “These changes were not just good for me, but also for my fellow members.”

Last summer, about 9,000 members of UFCW Local 700 who work at Kroger stores in Indianapolis, Ft. Wayne and South Bend, Ind., ratified new contracts. The new agreements include wage increases over the life of the contract, lump-sum compensation for top-rated and grandfathered workers, and department heads; higher premiums for night crews; and additional improvements. The Negotiating Committees protected and improved quality, affordable health care and secured the retirement benefits these hard-working members have earned.

Last September, more than 16,000 Ralphs workers in Southern California who are members of UFCW Local 8GS, 324, 135, 770, 1167, 1428, and 1442 ratified new contracts that raise wages, improve benefits and protect customer service. Their new agreement was part of a multiemployer contract that covered more than 60,000 UFCW Southern California grocery workers in total.

“This is the best contract we’ve had since 2004,” said Tony Campanello, a member of UFCW Local 324 who works at Ralphs in Long Beach, Calif. “We made considerable gains, including raises, and improvements to health care benefits, as well as a good optical and dental plan.”

“By strongly voting for a new contract that improves wages and benefits, thousands of hard-working members of the UFCW sent a powerful message about the power that comes from workers and customers standing together,” said UFCW International President Marc Perrone.

“This contract not only rewards hard work, it provides affordable health care, strong pensions, and critical benefits that ensure our UFCW members are able to build the better life they’ve earned. For the millions of customers our members serve, this contract ensures that the high-quality service and food they depend on will continue for years to come,” Perrone added.

Last October, 9,500 members of UFCW Local 555 who work at Fred Meyer ratified a new contract that raises wages, protects health and welfare benefits and pensions. And last December, more than 13,000 members of UFCW Locals 21 and 367 who work at Kroger-owned QFC and Fred Meyer, ratified contracts that include, among many other great accomplishments, the strongest journey wage increases in UFCW Local 21’s history. The contract also protects pensions and health care benefits, gives workers more control over scheduling, and includes strong safety language and a plan for the future of technology and workforce training.

These hard-working men and women joined the other 100,000 UFCW Kroger members who negotiated strong contracts at Kroger-owned grocery chains in Wisconsin, Colorado, Ohio, Michigan, Nevada, Illinois and Texas during the largest retail bargaining year in UFCW retail history. We could not be prouder of our union family!