Albertsons Deli Workers in Idaho Stand Together for a Better Life 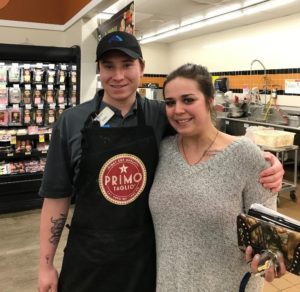 Albertsons deli workers in Emmett, Idaho, achieved their goal of union representation by joining UFCW Local 368A on Feb. 7. The workers joined our union family because they wanted to ensure they were able to earn the same wages and benefits as their unionized colleagues in the other departments. The store is located in a small town of nearly 7,000 people tucked away in rural Gem County.

The workers bravely stood strong in the face of the company’s anti-union campaign which included mandatory “union meetings” to share management’s opinions about unions. In these meetings, managers would even compare our union representatives to “salespeople and politicians.”

According to these workers, the meetings falsely claimed that union members receive lower pay and lose health care and retirement benefits. Standing strong, these workers said these meetings only fueled their determination. UFCW members in other departments at the store showed their support for these deli workers, sharing stories and words of encouragement.

After two previous attempts to secure a union membership for the deli department, the third time was a charm. The Feb. 7 votes in favor of joining UFCW solidified the victory.

“The deli is hard work, pay is generally lower, and there is high turnover,” Johnson said. “Finally, we are going to have a voice at work. We work hard and we are asking for recognition, better pay, benefits, and a more predictable work schedule that allows us to better plan our lives.”

“Guaranteed pay raises mean a lot, especially after I moved into a new apartment where I pay more for rent,” said Urrutia.

“The February 7 vote was a strong victory for these workers,” said UFCW Local 368A President Jack Caldwell. “All Albertsons workers deserve a chance to negotiate a contract to improve their conditions at work and that’s exactly what these brave deli workers achieved.”