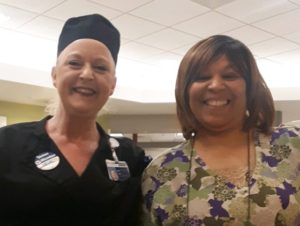 In January, more than 4,000 members of UFCW Local 21 who work for Providence Health & Services hospitals in Washington ratified new contracts that raise wages, improve staffing levels, and strengthen workplace safety. These members, who are registered nurses, professional and technical staff, and maintenance workers, achieved this victory by standing together through months of negotiations.

UFCW Local 21 members strengthened their power at the negotiating table by coordinating across the wide number of bargaining units, as well as with the Washington State Nurses Association (WSNA), and SEIU Healthcare 1199 Northwest, which were independently negotiating their contracts with Providence covering over 10,000 more nurses and health care workers.

With strong member-to-member communication, UFCW Local 21 was able to ensure these workers understood the value of the new contract and ratified it by an overwhelming margin. Building on the momentum of this win, these workers encouraged fellow members to sign up for the Active Ballot Club and succeeded in getting non-union workers to join UFCW Local 21.

Key to the success for UFCW Local 21 throughout the negotiations was putting the spotlight on Providence, a huge health care employer with $24 billion in revenue and $11 billion in cash reserves. UFCW Local 21 made clear that workers would not be pressured into accepting unfair contracts that would have eliminated earned leave and taken millions of dollars out of the pockets of these employees.

Just hours before UFCW Local 21 collectively would have issued their 10-day notices to strike, they had a breakthrough at the negotiating table. This was followed by around the clock negotiations, which resulted in agreements being reached across all the UFCW Local 21 and WSNA bargaining units. SEIU Healthcare 1199 Northwest was unable to reach an agreement and later went on a three-day strike in January.

UFCW Local 21 secured new agreements which included no cuts to paid time off/sick leave and only accepted the new leave system, where it was an improvement, for employees at the Holy Family and St. Mary hospitals.

Contractual wins across UFCW Local 21’s Providence bargaining units included improved safety standards and staffing levels; significant wage increases for every scale; ratification bonus payments; many market adjustments and increases to premiums; better language in the contract to increase their power as unionized workers; and set expirations in a way that will allow them to take action together in greater numbers in the next round of negotiations.

“We showed that through unity and a commitment to our patients and each other that we could win fair contracts that are better for patient care and safety, better for staffing and better for the future of our hospitals,” said Jodi Spurgin and Carolyn Kennedy, who are long-time UFCW Local 21 leaders at Providence Holy Family Hospital in Spokane, one of many locations covered by the new contracts.