How UFCW Is Supporting Good Jobs for Cannabis Workers Nationwide 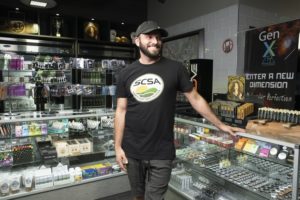 Thanks to hard-working UFCW locals and organizers across the country, our union family is supporting good jobs for thousands of workers in the cannabis industry.

In recent months, UFCW locals have been building worker power with historic victories for cannabis workers in New England, the Midwest, and Mid-Atlantic.

Cannabis workers know the value and benefits that come with joining our union family. Adam Schneider, who helps lead production at Sira’s Milford, Mass., facility and was one of the company’s earliest employees, voted to join UFCW Local 1445 because it would offer workers protections and representation in a fast-changing industry. “Now if anything happens to me, instead of going to the higher-ups and hoping they listen, I can go the union and have them fight for me. Someone has your back,” he said.

The UFCW has been a strong champion for legislation that empowers cannabis workers and ensures they are treated with the respect and dignity they deserve. The International’s Organizing Department and the Legislative and Political Action Department have been instrumental in helping to pass legislation that paves the way for effective union organizing.

As the UFCW builds on its exclusive cannabis jurisdiction from the AFL-CIO, the Cannabis Workers Risings Campaign has drafted and is implementing – with input and support from key International departments and regions – a 50 State Strategic Organizing Plan. Highlights of that plan include:

• Making targeted investments in political and organizing campaigns in cannabis;
• Prioritizing equity and diversity in cannabis ownership and employment; and
• Strengthening cannabis organizing and bargaining with borrowed personnel and SPURs.

In 2020, the UFCW is ready to continue our union’s work to empower cannabis workers and ensure this rapidly growing industry is creating the good jobs our families and communities need. We will achieve this by strengthening coordination between locals, regions and the national campaign, as well as providing staff development and industry-specific training. Stay tuned for more information about an Inaugural International Cannabis Conference and Training to help us put this plan into action.