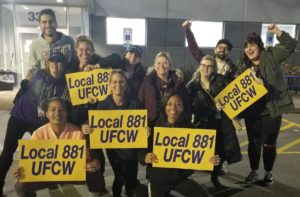 Workers at Cresco Labs in Joliet, Ill., made history by joining UFCW Local 881 on Jan. 14, becoming the first cannabis workers in Illinois history to achieve a union contract. This victory came just weeks after recreational cannabis was legalized in the state. Cresco Labs is one of the largest cannabis companies operating in Illinois.

This election sets a strong precedent for the new and expanding Illinois cannabis industry. After a few weeks into cannabis legalization in Illinois, the Cresco workers are showing how the cannabis industry can live up to the promises it made to local communities when it lobbied for their support.

The goal of the Illinois cannabis legalization was to support good-paying union jobs throughout the industry. With a union contract, cannabis jobs can help hard-working men and women support their families and strengthen their communities. The UFCW is working to ensure that cannabis jobs provide good wages, pensions, health care coverage, and dignity in the workplace.

The 100 Cresco Labs workers were supported throughout the organizing campaign by U.S. Senator Bernie Sanders, U.S. Representatives Bill Foster and Robin Kelly, as well as local legislators and religious, labor, and community organizations.

“Unions give us a way to be represented as a collective group and give everyone a voice,” said Jaclyn Taylor, a Cresco Labs employee.

“Congratulations to the new Local 881 members at Cresco in Joliet who have set a positive example ‒ for the entire state of Illinois and the cannabis industry at large ‒ of what can happen when workers come together to improve their working conditions,” said UFCW Local 881 President Steve Powell. “It takes strong resolve on the part of workers to stand up and demand a real voice on the job. Our union is proud of these workers and looks forward to standing with them to negotiate and demand a fair and just contract that will improve their working conditions.”