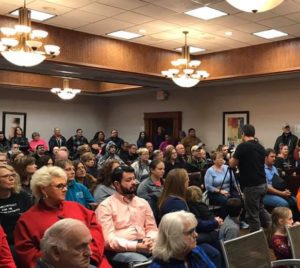 UFCW  Local 222 recently partnered with the International’s Legislative and Political Action Department (LAPAD) to help nurses in Sioux City, Iowa, gain political support as they rallied for a strong contract.

UFCW Local 222 nurses are bargaining a contract with MercyOne in Sioux City, but unfortunately bargaining has stalled. These hard-working members of UFCW Local 222 are standing up for better staffing levels, safety and wages, so that one good job can be enough for these workers to support their families and the patients they care for.

On November 21, more than 150 attendees joined MercyOne nurses at a standing room only community rally in Sioux City. Rally attendees were recruited by the nurses and community supporters.

Councilwoman Rhonda Capron and J.D. Scholten, who is running for Congress in Iowa’s 4th Congressional District, encouraged their supporters to attend the event, as well. At the rally, patients spoke of the caring nurses who went above and beyond for them; nurses spoke about the issues they are fighting for; and former MercyOne nurses explained why they left. Political leaders like Capron and a surrogate from Senator Cory Booker’s presidential campaign also spoke in support of the nurses and demanded that MercyOne return to the bargaining table. 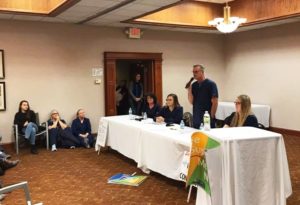 Iowa State Representative Chris Hall praised nurses with UFCW Local 222, saying, “Second only to their love, their labor is one of the most important things that they can give.”

Nurse Sammy Finn read a letter on behalf of Scholten, which stated, “A study last week revealed that 34 million Americans know someone who has died in the past five years because they could not afford health care. Affordable, accessible, comprehensive, and universal health care must be our goal, but we cannot get there without first ensuring that our nurses and health care workers have safe working conditions, a living wage, and decent benefits.”

“The politicians’ support of the registered nurses at MercyOne recently has helped in opening more dialogue about safe staffing ratios and patient safety,” said Marissa Morris, who is an ortho neuro registered nurse. “We hope that these concerns can be taken to a legislative / state level to implement laws and help get MercyOne to return to the bargaining table.”

The LAPAD can help your local reach out to elected officials to help gain their support for strong contracts for your members. If you are interested in learning more, contact International Vice President and LAPAD Director Ademola Oyefeso at aoyefeso@ufcw.org.