On Nov. 5, UFCW members and hard-working families across the state of Kentucky helped elect a pro-worker champion, Andy Beshear, to the governor’s office while rejecting incumbent Governor Matt Bevin. During his four-year term in office, Bevin signed a work for less law, ended the prevailing wage, and tried to eliminate public worker pensions.

For the benefit of our over 25,000 Kentucky members and working people across the commonwealth, the International worked closely with UFCW Locals 227 and 75 to make the 2019 Kentucky gubernatorial race a top priority with a robust member-to-member outreach program.

For seven weeks, 20 state-based, lost-time members educated, persuaded and mobilized their fellow UFCW members throughout Kentucky to vote for Beshear, talking to 5,045 UFCW members. And Beshear only beat Bevin by 5,189 votes.

“Our lost-time members were a powerful force throughout the state in helping push Andy Beshear to victory,” said UFCW Local 227 President Bob Blair. “In helping to defeat Matt Bevin, Local 227 sent a clear message to anti-worker politicians: Those that attack labor will be held to account. UFCW Local 227 stands at the ready to advocate for and protect the rights of our members and their families.”

This was a hard-fought election that was based on Beshear’s tireless efforts as Kentucky’s attorney general to stand up for working people. 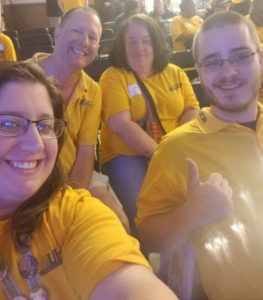 “We’re honored to have participated in helping put a governor in office who will advocate for our members and their families. As the Beshear administration plans to take office, UFCW Local 75 members share in this victory and look forward to collaborating with the new governor,” said UFCW Local 75 President Kevin Garvey.

Beshear was sworn into office on Dec. 10.