UFCW Is Calling on Congress to Protect Our Members’ Pensions 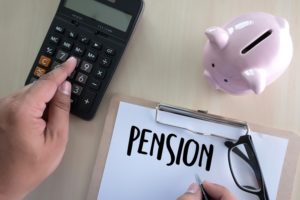 Protecting the retirement benefits our hard-working members have earned is a key priority for our union. With Congress releasing a new proposal from U.S. Senate Finance Committee Chairman Charles Grassley and U.S. Senate Health, Education, Labor, and Pensions Committee Chairman Lamar Alexander that endangers pensions for millions of workers across the country, the UFCW is standing up to make our members’ voices heard and stop this legislation.

The current plan in Congress would threaten strong pension plans and have a big impact on plans with lower contribution rates. This pension proposal would let businesses withdraw from plans without paying their full share of benefits that workers have earned. The proposal also includes the creation of “Composite Plans,” which would enable businesses to shift the investment risk from employers to workers. In addition, the proposal also changes the way liabilities are valued, and increases costs to funds as well as taxes to union treasuries, which are not fund assets.

“Millions of American workers – union and nonunion – would have their retirement thrown into chaos if this plan passes,” said UFCW International President Marc Perrone. “Not only would it cause a massive reduction in current pension benefits, it will recklessly endanger the pensions of future retirees across the country. After a lifetime of hard work and sacrifice, workers should be able to retire with dignity and the security of knowing they can provide for themselves and their loved ones.”

The UFCW is calling for Congress to pass H.R. 397, the Rehabilitation for Multiemployer Pensions Act. In 2018, UFCW sent a letter to Congress urging action on this legislation, which would provide low-cost loans to eligible multiemployer pension plans to enable them to continue to pay earned pensions to retirees and fund their long-term pension commitments.

The Rehabilitation for Multiemployer Pensions Act would create a Pension Rehabilitation Administration within the Treasury Department to provide low-cost loans to qualified underfunded multiemployer pension plans. Plans would have up to 30 years to pay earned retiree benefits, prudently invest the loan proceeds and employer contributions, and repay the loan. During the loan period, employers may not reduce contributions and the plan may not increase promised benefits.

“Congress must pass the bipartisan Rehabilitation for Multiemployer Pensions Act to protect these pensions before the crisis becomes even more costly and widespread,” Perrone said. “The retirement security for millions of workers and their families is on the line. We cannot wait any longer.”

Additional information about the Rehabilitation for Multiemployer Pensions Act can be found here.