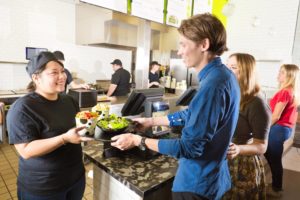 The NLRB ruled this summer that companies may exclude organizers from cafeterias or snack bars, as long as they do not do so in a discriminating manner. Most importantly, the NLRB maintained protections for organizers that prevent companies from excluding them if they are acting like other customers.

So, if companies allow customers to sit at tables and talk to each other or to workers who sit nearby, companies must also allow organizers to similarly sit at tables and talk to workers. To preserve this right, organizers should be careful not to distribute literature or union paraphernalia or to hop from table to table. If they do, this NLRB will rule that companies may kick them out.

In this decision, two union representatives met with about six workers at two tables in a hospital cafeteria for more than one hour. They ate and talked about an organizing campaign and a settlement of an NLRB case. While they spoke, other workers stopped by.

A manager told the representatives that they had to leave, explaining that the cafeteria was only for patients, patients’ families and visitors, and hospital employees. The NLRB ruled that the hospital could lawfully order the organizers to leave because customers did not put stacks of papers or trinkets on the table or pass out documents.

This case shows the importance of organizers acting like other customers when speaking with workers. If they do, even after this case, companies would be unlawfully discriminating if they ask the organizers to leave.

The name of the case is UPMC, 368 NLRB No. 2 (June 14, 2019). If you have any questions about this ruling, please contact George Wiszynski in the Legal Department at gwiszynski@ufcw.org.