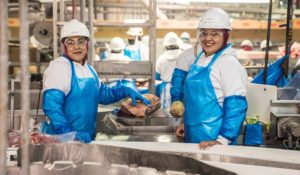 The UFCW, together with Public Citizen and UFCW Locals 663, 440 and 2, filed a federal lawsuit to stop a new pork plant rule that threatens the safety of workers and consumers.

The lawsuit was filed in the U.S. District Court for the District of Minnesota on Oct. 7 seeking to halt the U.S. Department of Agriculture’s (USDA) Modernization of Swine Slaughter Inspection Rule. This new rule eliminates the line speed limits in pork slaughter plants and turns over major meat inspection tasks from federal inspectors to the companies. This rule includes no requirement or funding to train plant employees on inspection techniques that were previously performed by USDA inspectors and are now their responsibility.

“Thousands of our members work hard every day in America’s pork plants to help families across the country put food on the table. Increasing pork plant line speeds is not only a reckless giveaway to giant corporations, it will put thousands of workers in harm’s way,” said UFCW International President Marc Perrone in a statement. “This new rule would also dramatically weaken critical protections that Americans depend on to be able to select safe, healthy food to feed their families every day. The safety of America’s food and workers is not for sale and this lawsuit seeks to ensure this dangerous rule is set aside and these companies are held accountable.”

The UFCW represents about 250,000 workers in the meatpacking and food processing industries and 30,000 workers in pork plants, and our members handle 71 percent of all hogs slaughtered and processed in the United States. Even at current line speeds, swine slaughter and processing workers face many job risks that can lead to severe injury, illness and death. Last May, more than 6,500 UFCW members who work in pork plants submitted comments to the USDA in opposition to the proposed rule.

“Shockingly, USDA admitted in its rule that it simply ignored the mounds of evidence that showed its actions will harm workers, while bending over backwards to help businesses. That violates basic principles of administrative law,” said Adam Pulver, an attorney with Public Citizen, which represents UFCW and the three locals in the case.

The lawsuit alleges that the new rule violates the Administrative Procedure Act because it is not backed by reasoned decision-making.

“We urged the USDA to consider how unsafe this rule would make our workplaces, but they refused,” said UFCW Local 663 President Matt Utecht. “We had no choice but to go to court to stop a rule that will endanger the health and livelihoods of thousands of UFCW members.”

“We have a lot of pride in the products our members produce,” said UFCW Local 440 President Leo Kanne. “This rule will erode the quality and safety of the food we make and feed to our own families.”

“The USDA claims that this rule will make our food safer,” said UFCW Local 2 President Martin Rosas. “But our members, who have worked in the industry for years, know firsthand it makes both the food they make and the plants they work in less safe. Let’s listen to the first-hand experts who work in these plants every day, instead of big corporations just looking to make even more money.”

The International’s Communications Department has created a Pork Line Speed Campaign Toolkit for locals that includes content and graphics about this lawsuit and a link where members can reach out to members of Congress for Twitter, Facebook, Instagram and emails. For more information or to obtain this toolkit, contact Amy Ritter in the International’s Communication Department at aritter@ufcw.org.

If you have any questions regarding the lawsuit, contact Sarai King in the International’s Legal Department at sking@ufcw.org.