Local 1189 Co-op Workers Stand Together for a Better Contract 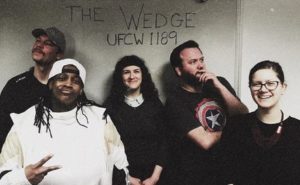 Members of UFCW Local 1189 who work at the Wedge Co-op in Minneapolis recently ratified a new contract that raises wages and improves benefits.

The three-year contract, which was ratified by an overwhelming majority of the members, includes a wage scale that adjusts each year of the contract to comply with the new Minneapolis minimum wage increases. The new contract also includes orientation language that allows a steward to spend up to 30 minutes with each new member on paid time to explain the benefits of union membership, as well as successorship and relocation language, which was a top priority for the workers.

“The wage scale in the contract makes me think of Paul Wellstone and a belief I share with him that ‘we all do better when we all do better,’” said Nathan Coombes, who served as a member of the negotiating committee. “As the Minneapolis minimum wage rises over the three years of our contract, the majority of us see our pay rise, as well. I’m proud of my co-op and this contract.”