Victory for Local 152 Members Shows Power of a Union Contract 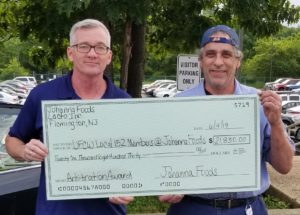 Twelve members of UFCW Local 152 who work at Johanna Foods in Flemington, N.J., recently won $21,830 in back pay after their employer failed to honor their current contract.

Shortly after the members at Johanna Foods ratified their contract in May 2017, former Shop Steward Tom Noll filed a class action grievance on behalf of twelve UFCW Local 152 members.

Tom and his coworkers should have received a negotiated increase in wages as outlined in their contract, but the company failed to follow through and pay them. Because Tom was part of the Negotiating Committee, he knew that the company was in the wrong and decided to reach out to Union Representative Mike Thompson for help.

Shortly thereafter, UFCW Local 152 filed for arbitration on behalf of the workers. The arbitrator agreed with UFCW Local 152 and the twelve members of Johanna Foods, concluding that the company was at fault and these members deserved the wage increases promised to them—resulting in a back pay award for our members totaling $21,830.

UFCW Local 152 will always work hard to ensure their members receive fair treatment in the workplace, and stewards like Tom exemplify what it means to be a great union member.

“Without Tom’s tireless efforts, those twelve members would never have received what they rightly deserved,” said Thompson.