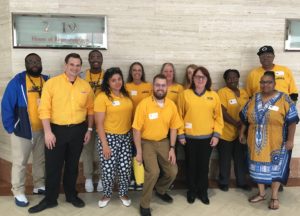 Over 100 members of UFCW Locals 75 and 1059 made their voices heard at the Ohio statehouse during the UFCW Ohio Lobby Day on June 19. In coordination with the International’s Legislative and Political Action Department, members lobbied on two key issues: earned paid sick leave and pregnancy accommodations for workers.

“Lobby Day is a great opportunity for our members to let lawmakers know what it’s like for working people, what our issues are, and how to make our state better,” said UFCW Local 1059 President Randy Quickel.

Gold shirts filled both the Ohio Senate and House office buildings as our members shared powerful stories about the impossible choices many workers face without paid leave or pregnancy accommodations. “Being able to participate in Lobby Day and join my union family in telling our story is very important,” said Latashia Thaxton, who is a member of UFCW Local 75. “If we don’t take the time to let our elected leaders know who we are, no one else will!”

Members also heard from key leaders in the Ohio General Assembly, including a visit from the Ohio House Speaker Larry Householder and Ohio House Minority Leader Emilia Sykes. Additionally, Representative Kristen Boggs spoke to members about her role as a champion for both earned paid sick leave and pregnancy accommodations for workers.

“Lobbying the Ohio General Assembly empowers our members and union to make our voices heard by those we elect to make decisions that affect our jobs, communities and families,” said UFCW Local 75 President Kevin Garvey. “With a large presence, by telling their stories and sharing their perspectives, UFCW members help educate policy makers on the issues and day-to-day realities of hard-working families. Through these efforts, we hope to build legislator accountability on protecting and advancing the labor movement.”

“Lobby Day is about speaking up and making politicians take notice,” said Bobby Hazlett, who is a member of UFCW Local 1059. We’re making noise because too many workers have to stay silent.”

If your local is interested in coordinating a lobby day with the Legislative and Political Action Department, contact your region’s political point person in the department or reach out to Political Director Karen Gasper at kgasper@ufcw.org.