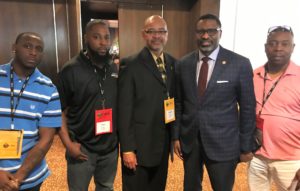 Members of the UFCW played an important role at the Coalition of Black Trade Unionists (CBTU) convention, which took place on May 22 to 27 in Atlanta.

Members of the UFCW’s Minority Coalition hosted their caucus meeting at the convention and reported on the ongoing fight for workers’ rights in Missouri, including fair scheduling, after the repeal of work for less legislation.

This year’s event also featured the UFCW’s Civil Rights and Community Action Department, which was invited to present a workshop at the convention. Titled “Addressing Sexual Violence in the Workplace,” the workshop focused on policies and practices to protect workers from harm at their places of work.

The convention, which centered around the theme “Reclaiming Our Country: United for a Better Tomorrow,” was attended by hundreds of members of labor unions from around the country.