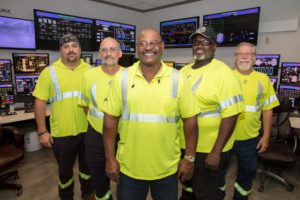 Earlier this month, John Morawetz from the ICWUC’s Health and Safety Department joined a Congressional roundtable with lawmakers to strengthen safety protections for chemical workers across the country.

“Unions have a proud history of fighting for the right to a safe workplace and for the basic right for workers to return home after a day on the job as healthy as when they left,” Morawetz said to members of the Senate Committee on Homeland Security and Governmental Affairs at a June 4 roundtable.

In coordination with the UFCW’s Legislative and Political Action Department, Morawetz also testified to the House Homeland Security Subcommittee on Cybersecurity, Infrastructure Protection, and Innovation on March 12. He spoke about the Chemical Facility Anti-Terrorism Standards (CFATS) program, which was established in 2007 by the Department of Homeland Security to identify and assess security at high-risk chemical facilities. He also underscored the important role unions play in promoting strong and effective health and safety standards at chemical plants.

“Unions have made sure their members are educated and trained on the safety and health hazards they face on the job,” he said. “Union negotiators bargain over health and safety contract language, actively participate in the investigation and identification of health and safety hazards and testify in support of legislation which strengthens workplace security. Unions are actively involved in making our workplaces safer.”

Morawetz highlighted the importance of the security and safety of workers in chemical plants, speaking from his three decades of experience investigating occupational health hazards. He focused on the measures that will not only protect our country from a terrorist attack, but also minimize the impact to workers and local communities of a hazardous material release resulting from a natural disaster or accident.

He also made four recommendations to the committee that are crucial to the security and safety at chemical facilities, including more worker involvement in chemical plant security, including CFATS inspections; effective training; strengthened protections for whistle blowers; and identifying and disseminating successful practices.

“Chemical workers have direct, current knowledge and experience of plant operations that is invaluable in solving site specific problems,” he said. “Chemical workers know first-hand how a plant works, what chemicals are used, how those chemicals react to one another, their facilities’ weaknesses and the most recent operational changes. We also know if backup systems will work when the power goes out. We know the exact location of the CFATS hazardous materials and we know if training is effective. All these responsibilities make chemical workers the first and best line of defense.”

You can read the full testimony here.