Kroger Members in Indianapolis Stand Together for a Better Contract 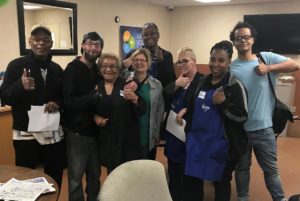 The three-year contract, which was ratified by an overwhelming margin, includes guaranteed pay increases over the life of the contract (in addition to lump-sum compensation for top-rated and grandfathered workers and department heads), and higher premiums for the night crews. The contract also includes improvements to health care and contract language, and protects the retirement security of our members.