UFCW Honors the Legacy of MLK 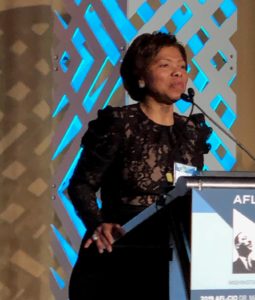 International Vice President and Director of the Civil Rights and Community Action Department (CRCAD) Robin Williams held two workshops on restorative justice at the conference with Desmond Meade, a formerly homeless returning citizen, who is now the chair of Floridians for a Fair Democracy, president of the Florida Rights Restoration Coalition, and a graduate of Florida International University College of Law. Meade led the effort to pass Amendment 4 in Florida on Nov. 6, 2018. Also known as the Voting Rights Restoration for Felons Initiative, Amendment 4 restores a person’s right to vote after they complete their sentences, with exceptions for people convicted of murder and felony sex offenses. The restorative justice workshops focused on how labor unions can play a role with assisting returning citizens with second chance clinics and stopping the school to prison pipeline.

UFCW International Secretary-Treasurer Esther López also held two workshops titled “Immigrant Workers and the Future of the Labor Movement” with Coalition of Black Trade Unionists President Terry Melvin. The workshops focused on how the labor movement can help to ensure that the rights of all workers are protected in the workplace. López and Williams also participated in the Women’s March on Saturday, Jan. 19 and during a day of community service on Jan. 21. Williams was also honored at the conference’s gala with the “Drum Major for Justice Award.”

“Just as the case with Coretta Scott King, wherever there’s a strong movement for justice, you will find a strong black woman behind it,” said Williams at the gala. “Women are life-givers. We give birth to humanity and the greatest movements. Justice must be inclusive. Complete freedom comes when everyone works together. Our movements are one and the same.”