Organizing Is “InStyle” With Local 770 Member 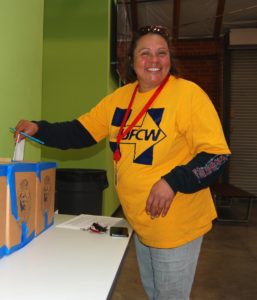 UFCW Local 770 member Rina Chavarria, who works in the rib conversion department at the Farmer John pork processing plant in Vernon, California, was recently featured in InStyle magazine for her efforts to organize and represent her coworkers as a union shop steward.

Chavarria is one of roughly 1,200 UFCW Local 770 members who work at the Farmer John hog slaughterhouse, which is owned by Smithfield Foods. She and her coworkers in the rib conversion department cut more than 7,000 pork ribs in a four-hour shift, which is about 30 ribs per minute. She shared her thoughts about being chosen for the profile in InStyle magazine titled “6 Women Making Sure Workplace Equality Isn’t Just for the C-Suite.”

“I feel good that I was considered for this story. Very often, people don’t realize that as working women, we are on our own working to provide for our children and to be able to help them succeed in life,” said Chavarria, who is the mother of Cynthia, age 18 and Marco, age 10. “I teach my children to be fighters. I tell them to dream big and fight for those dreams, and to be good people.”

Being featured in an InStyle article was “an acknowledgment of us women who are hard-working people and who don’t chicken out,” she said. “I really enjoyed the experience of doing the photo shoot and the interview. It was a very nice, new experience. I also liked it because I had the opportunity to meet other women from different industries such as farm workers, caregivers, and hotel workers.”

Chavarria has been a member of the UFCW Local 770 bargaining committee since 2016 when she was actively engaged in contract negotiations. Last year, she became a shop steward at the plant, where she has worked for five years. She was also involved in the bargaining sessions of 2018 when union members won a union contract that included wage increases, affordable health care, union security, workplace protections and other benefits.

“Being a UFCW 770 member represents a great value to me because I have the opportunity to be a voice for my coworkers,” she said. “I’m involved in the union to help my coworkers as much as I can. As a shop steward, I’m more aware of the problems that my coworkers face in the plant, so I to try to find a way to resolve them. I love helping my coworkers. That’s why I enjoy being a union steward. And I really like defending my rights and the rights of my coworkers.”

Last year, Chavarria completed a three-day health and safety training and also represented her local at the UFCW International’s packinghouse chain meeting in Nebraska. She is always eager to collaborate with her union to make sure her fellow workers at Farmer John have respect, dignity and a voice on the job.