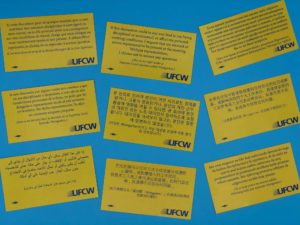 One of the many benefits of belonging to our union family is the right to insist that a steward or union representative be present during all meetings or discussions with any manager or supervisor that might be related to or lead to discipline. These rights to witnesses are called Weingarten rights after NLRB v. J. Weingarten, Inc., a landmark U.S. Supreme Court decision. A UFCW member pursued this case and union members everywhere have these rights.

The UFCW’s Legal Department’s has compiled some answers to commonly asked questions regarding Weingarten rights, as follows:

When do workers have Weingarten rights to have a steward or union representative present when speaking to a supervisor?

Anytime workers think the manager may question them about something that the workers feel they might be disciplined for. EXAMPLE: An assistant manager asks to talk about an accident the worker was involved in during the previous week.  The worker thinks the manager is trying to find out who was responsible.  The worker has Weingarten rights.

What kind of “communications” does Weingarten apply to?

Does the communication have to occur at work?

No. EXAMPLE: A manager telephones a worker at home about the worker’s absences. The worker has Weingarten rights. The worker can tell the manager that the worker would rather speak at work in the presence of a steward or union representative.

When should workers invoke Weingarten rights?

How do workers invoke Weingarten rights?

Workers must invoke Weingarten rights by telling supervisors they want a witness. Workers are not required to invoke their Weingarten rights if the contract prohibits the company from talking to workers without a witness. The best practice is for locals to bargain automatic Weingarten rights in contracts so workers don’t risk waiving them by forgetting to invoke their rights in the face of possible discipline. The next best practice is for unions to distribute Weingarten cards that workers can keep in their wallets to pull out and read to supervisors. Locals should periodically emphasize to workers that they should remember to refer to the cards whenever supervisors talk to them about discipline.

What is the representative or steward’s role?

What other rights does Weingarten give workers?

What are the company’s obligations?

If you have any questions regarding Weingarten rights, contact Associate General Counsel George Wiszynski at gwiszynski@ufcw.org.