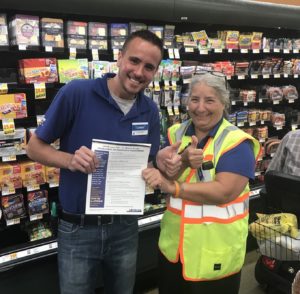 The UFCW’s Legal Department has written suggested contract language which addresses over 50 contract clauses ranging from access to discrimination to technological changes in the workplace. The International assembled these contract clauses to help locals start the negotiating process with favorable, pro-member language. When locals propose language in existing contracts, they are frequently starting to negotiate with language that is not as favorable as language that locals have not already compromised with companies. To date, dozens of locals have used this suggested language to negotiate strong contracts that benefit their members.

“Many of the locals across Region 1 have achieved great success in bargaining new and existing contracts due to the strong language suggestions from the International,” said International Vice President and Director of Region 1 Dave Young. “The strict language surrounding “Work for Less” protections and member orientation, developed with help from locals around North America, has proven invaluable to our locals in their continued effort of maintaining the firewall against the spread of these anti-worker policies.”

The suggested contract language is based on the best parts of numerous provisions in existing contracts, and uses plain and familiar English and less legalese so that it is more understandable to members, stewards and representatives. This language may be most useful for locals that are proposing a first contract or have determined that they have a chance of strengthening language in existing provisions. Locals are encouraged to pick and choose those sections of provisions most applicable or useful, and to work with the Legal Department to change language so that it best helps them represent their members.

While some companies may initially reject the language as too pro-member or union, locals should be able to explain at the bargaining table how each part of each clause is reasonable. To persuade companies to agree to clauses close to the suggested language, locals can insist that companies explain why they’re refusing to agree to each part of the clauses. Locals can then modify the language to address serious or good faith concerns companies raise.

The collection of suggested contract language is available at the “Suggested Contract Language” link here. If you have any suggestions about improving the language or adding new provisions, contact Associate General Counsel George Wiszynski at gwiszynski@ufcw.org.