Celebrating Hispanic Heritage Month by Building Power at the Polls 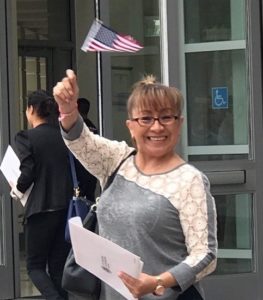 UFCW Local 770 member Patricia Cruz, who has worked as a cashier at Food4Less in Los Angeles for 20 years, is celebrating Hispanic Heritage Month by getting out the vote leading up to the midterm elections.

She shared her story with us and hopes it will inspire her fellow members to get involved and help change the political environment.

Thanks to UFCW’s Union Citizenship Action Network (UCAN) program, I became a U.S. Citizen on November 15, 2016. The union helped me fill out the citizenship application and assisted me with all the paperwork. This year is the first time I’m voting, and I’m grateful to my union for making this happen.

It’s very important for us workers to have a voice in the workplace. The union protects us against unfair working conditions and fights to keep our benefits. The economic situation that our families are currently facing is very harsh, so we need to continue standing together to protect our benefits, especially health care. In my case, I have participated at the picket lines whenever we have launched a boycott to demand a fair union contract at our stores, and at other industries represented by our union.

For the first time, I’ll have the opportunity to vote and participate in the U.S. electoral process. I feel that my voice will have a say in these 2018 elections, and I will join the voices of millions of workers. By exercising my right to vote, I hope to have an impact on policies that affect us and to make changes in the community because we are hard-working people, and we give more to this society than we take.

The message I have for elected officials and politicians is that their fight for justice should include changes that can benefit our communities and all Hispanic women and families because we are hard-working people who contribute greatly to this country. Often when politicians are in an election campaign, they promise to make changes that can benefit our communities. But once they’re in power, they don’t honor their commitments.

I would like those in power to help Dreamers because there are a lot of young undocumented folks who are very talented and valuable. They are the future of this country and I believe that politicians lied to them to make them come out of the shadows and now they don’t want to help them.

I believe that the immigration system needs to be reformed so millions of people can work legally. I think even politicians and the American society at large would benefit if undocumented workers were legalized because they could be more productive and would have more flexibility to contribute to the U.S. economy.

I also think that all of us working men and women should engage in the get out the vote efforts to send a strong message to politicians of both parties. We as a community need to stop the current, heartless immigration policies that are causing the separation of families, mass deportations, and affecting immigrants and workers in general.

I’m willing and ready to go out, knock on doors to get out the vote, and show that we can make a change in this country.

We are always looking to hear from member activists like Patricia Cruz who are engaged in local union and community activities. Please contact the UFCW Civil Rights and Community Action Department at 202-466-1511 to share your story with us.