UFCW Members Celebrate Hispanic Heritage Month by Getting Out the Vote 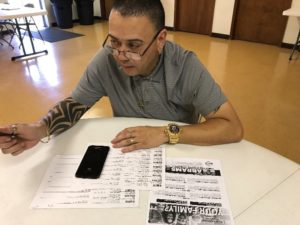 RWDSU / UFCW member Jesus Rodriguez is getting out the vote during Hispanic Heritage Month.

UFCW members are celebrating Hispanic Heritage Month by getting out the vote in the weeks leading up to the midterm elections.

Jesus Rodriguez, a RWDSU / UFCW member at Southern Tea in Marietta, Georgia, is one of the many members of our union family who are volunteering their time to make a difference this Hispanic Heritage Month by building power at the polls for the Hispanic community. This election season, he’s been phone banking for Georgia gubernatorial candidate Stacey Abrams, a champion of hard-working people who want to build a better life.

Rodriquez believes that being a union member has helped him empower other workers. “The union educates me, which allows me to educate others,” he said. “Being bilingual allows me to speak to our fellow union members about the benefits of union membership. And as a cancer survivor, I believe the most important issue of this election is health care.”

“When deciding what candidates to endorse, it’s also important to consider their commitment to criminal justice reform,” he added. “Laws need to be consistent. I also choose candidates that are supportive of unions and legalization of marijuana. My wife suffers from chronic pain, and medical marijuana would benefit my wife and other Georgians.”

By getting involved in voter engagement, Rodriguez is one of many UFCW members who are trying to change the political landscape and create the better America that our union family and all hard-working women and men have earned and deserve. If you’re interested in volunteering your time this election season, contact the Legislative and Political Action Department at (202)-223-3111.