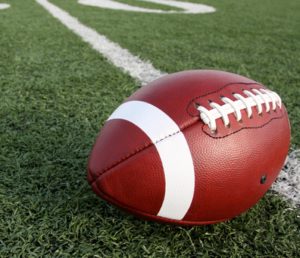 This year, the National Football League Players Association (NFLPA) celebrated Labor Day by recognizing UFCW Local 1546 members at the Horween Leather Company in Chicago and their contributions to professional football. Retired NFL player Israel Idonije of the Chicago Bears visited the company to thank members of UFCW Local 1546 for their hard work and support.

The company takes pride in the talented workers whose skills are evident in the quality of the final product. Despite the leather’s sheen, which can give the appearance of being slippery, the proprietary “tanned in tack” finish actually means the ball gets stickier after being buffed a few times, making it easier to grip. A 1,000-ton press with special German-made embossing plates gives the leather its distinctive pebbling.

UFCW Local 1546 shop steward Juan Torres gave Idonije a tour of the tannery and explained the process of crafting the leather for the NFL’s footballs. The two union members discovered shared values that drive their work on the field and in the tannery.

“You talk about a brotherhood, a sisterhood – a union family: it’s the commitment of people working together to support one another. It’s really special,” said Idonije. “When you look at the detail and the craftsmanship that goes into such an important part of the game, and right through to the game itself, and the labor, the work, the effort, the energy – that’s what’s so special about both groups working together.”

You can view the NFLPA’s video of Idonije’s visit with members of UFCW Local 1546 at the Horween Leather Company here.