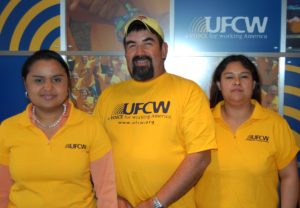 In a Labor Day op-ed in The Hill, UFCW International President Marc Perrone made it clear why unions – not politicians – will create the better America that hard-working families deserve.

An excerpt from the op-ed reads:

As the wealthiest elites celebrate a booming stock market and corporate America rejoices in a tax cut windfall, millions of hard-working Americans are struggling to survive.

According to the most recent report from the Labor Department, from July 2017 to July 2018, the cost of living was up 2.9 percent, while wages were up only 2.7 percent. This means that wages for many are failing to keep up with inflation as the cost of health care, prescription drugs, gasoline and housing continues to soar.

For decades, our elected leaders have sought to weaken unions, even as they permitted a concentration of wealth and a level of income inequality that now represents a clear and present danger to America. Yet, despite the divisive political climate, a pathway to change is emerging.

At some point soon, America’s hard-working families will cast politics aside and say enough is enough with the economic struggles they have had to endure. They will grow tired of empty corporate promises and realize the enormous value they have when they stand together.

A full copy of the op-ed can be found here.