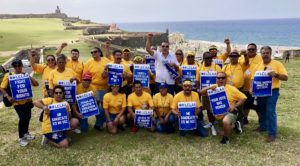 United Latinos of the UFCW held their executive board meeting in San Juan, Puerto Rico, on August 8 to 11 to help members of UFCW Local 481 and their families recover from the devastating effects of Hurricane Maria. Members of United Latinos also attended the Labor Council for Latin American Advancement (LCLAA) 2018 Convention, which was held in San Juan at the same time.

During the convention and meetings, United Latinos were able to pass a resolution on solidarity with UFCW workers in Puerto Rico, participate in day of service events and hold solidarity actions against the privatization of public education.  The day of service was geared towards rebuilding and repainting a shelter for young, disabled women and a nonprofit center aimed at assisting women who are escaping domestic violence.

“The LCLAA convention in which we participated as part of UFCW / United Latinos was a great opportunity to strengthen ties of solidarity and to say thank you for all the support we have received in Puerto Rico from our UFCW matrix, an action that we will always carry in our hearts,” said Andrés Lloret Gutiérez, president of UFCW Local 481. “We were able to strengthen alliances to face the great challenges that lie ahead, not only of workers’ rights, but also in defense of civil rights. We thank United Latinos and its executives for an enriching experience. Count on us in Puerto Rico to fight together for the good of the workers.”

“I am excited for the possibilities that can and will arise from the collaborative endeavors of Latinos and the greater communities in politics, organizing and civic engagement,” said UFCW Local 770 Organizing Director Rigo Valdez, who was elected as a LCLAA board member at the convention. “Together we can strengthen the labor movement and promote and empower Latinos across the country. I am proud of the work the United Latinos and UFCW Local 481 have done and I am proud of our collaborative plan to move on the solidarity resolution.”