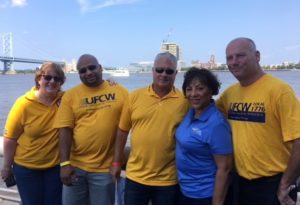 On August 15, members of UFCW Locals 152, 1360, 1776 and others joined their sisters and brothers at UNITE HERE to march for family reunification in Philadelphia. During a lively music and faith-filled rally on Philadelphia’s Penn Landing, just a few blocks away from where the Declaration of Independence was signed and where the Liberty Bell once rung, labor unions made clear that there was no equivocating: keeping families together is a core union value.

Our labor movement is committed to building an immigration system that lifts people up and ensures that we are all able to live and work with dignity regardless of where we were born. We oppose immigration enforcement tactics that breed fear and chill the exercise of basic workplace rights. By rejecting the politics of division, together we will build a strong, inclusive and democratic movement for justice for all hard-working families.

Mondesir spoke passionately about the need to defend Temporary Protected Status (TPS), and for workers to be united in the fight for immigrant justice. “No child should be separated from their parents,” he said. “Forcing children into cages is not right. Breaking apart families is not right. TPS holders are here to work for their dreams, just like all of us.” 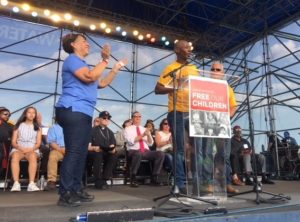