After Missouri, UFCW Prepares for More Victories This Election Season 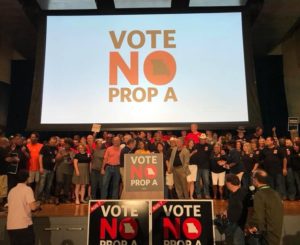 For our union, the defeat of work for less in Missouri is just the beginning of our 2018 efforts to secure meaningful electoral victories for hard-working families. Leading up to Election Day in November, we will be coordinating with UFCW locals across 26 states to make it easier for our members and their families to vote for the issues that matter to them. We will also be having more than 300 Lost-Timers deployed across the nation to visit worksites, knock on doors, and encourage entire communities to stand up and shape their futures.

What happened last week in Missouri should be motivating for all of us. Missouri became the 28th work for less state in February of 2017 and instead of accepting a tough defeat, UFCW locals in Missouri dusted themselves off and fought back. They immediately partnered with other labor unions and community allies to collect signatures and place a constitutional amendment on the 2018 ballot to reverse the law. Then they got to work canvassing, phone calling and visiting worksites to show hard-working families everywhere why stopping work for less was the right thing for Missouri’s future.

In the final weeks of this get out the vote effort, UFCW locals poured in from across the country to help with the final canvassing push and knocked on 52,386 doors. Newer technologies like Hustle were also deployed in partnership with the International to ensure that every UFCW member in Missouri understood the historic stakes of this election. In total, we were able to reach out to 2,780 members through Hustle to share information about how and when to vote.

These incredible efforts were a rousing success and voters rejected work for less Proposition A by a 2 to 1 margin on August 7.

“Defeating Prop A in Missouri is a clear sign that everyone, whether they are in a union or not, understands that we have to fight back against corporate greed,” said UFCW Local 655 President David Cook. “Hard-working middle class families deserve good wages and fair benefits, and I believe the overwhelming win in Missouri is proof that a message focused on what workers have earned resonates with a broad coalition of people.”

Rest assured, we will bring that message wherever we can this fall. The UFCW is committed to having the voices of our union family heard loud and clear in every election. For more information about the UFCW’s plans this election year or to get involved, contact the Legislative and Political Action Department at (202)-223-3111.