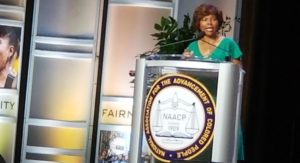 On July 18, UFCW International Vice President and Director of the Civil Rights and Community Action Department Robin Williams spoke about the need for new engagement strategies to drive voter turnout this election year at the NAACP’s convention in San Antonio. Williams serves on the national board of the NAACP, and was the first speaker featured during the convention’s civic engagement segment.

“If people of color and specifically black voters participated in elections at the same rate that whites do, we would have a progressive majority,” Williams said. “The conclusion is that we must invest in a range of engagement strategies that continue to grow our base of active black voters to move our agenda at scale and to realize electoral and legislative wins.”

Williams also called on the NAACP to continue to speak out against systemic racism and bigotry, as well as other issues that affect not only the black community, but other communities of color, as well. She also highlighted the importance of using election work to build political power for the broader civil rights movement.

“In order for us to defeat hate, we must vote!” Williams said.