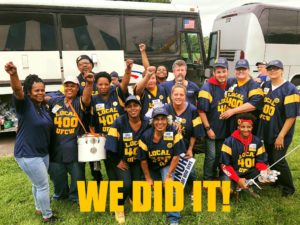 UFCW Local 400 members who work at Kroger store #536 in Norfolk, Virginia, reached an agreement with their employer on July 17 that allows them to be transferred to a former Farm Fresh store across the street if and when it reopens as a Kroger store.

This agreement brings much-needed certainty to the workers, who rallied outside of Kroger’s Mid-Atlantic Division headquarters in Roanoke on June 12 to demand more information about the company’s recent acquisition of eight Farm Fresh stores in the Hampton Roads region, one of which is directly across the street from Kroger store #536. The workers also delivered petitions signed by thousands of Kroger employees and customers in five shopping carts to Kroger’s Mid-Atlantic Division President Jerry Clontz, asking for Kroger officials to meet with them.

Under the new agreement, if Kroger closes store #536 and opens the former Farm Fresh store within six months, then the workers at store #536 may transfer to the newly opened store if they choose and will not have to quit and reapply for their jobs.