Introducing a New Generation to the UFCW 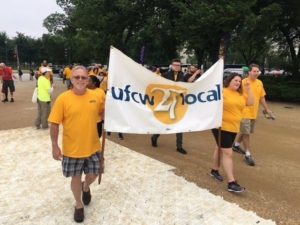 Kelly Crone, a Region 2 intern who worked at Local 27, is pictured on the right.

This summer, Region 2 hosted a six-week internship program to introduce a new generation to the UFCW and cultivate new labor activists and leaders. Thirteen interns participated in the program, which began on June 4 and ended on July 13. The interns worked with staff at UFCW Locals  27, 38, 400, 1208, 1776 and 1994 to learn about the fundamentals of organizing and how to engage union and nonunion members. The interns also learned about the value unions bring to hard-working families.

“I’ve enjoyed every aspect of this internship,” said Kelly Crone, who interned at UFCW Local 27. “I was able to experience many aspects of the union organization. One thing I learned, which I feel is important, is how to have a grievance meeting with a company when an employee is terminated. It was a great learning experience for me every time we fought to get someone’s job back. I was also able to be part of two new hire orientations and introduce employees to the union.”