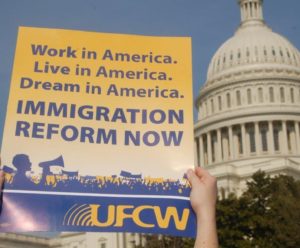 On April 26, UFCW International President Marc Perrone responded to a federal judge’s ruling that the Trump administration’s elimination of Deferred Action for Childhood Arrivals (DACA) was unlawful and that new applications must be accepted if the Department of Homeland Security (DHS) cannot provide a legally sufficient explanation for termination within 90 days.

The UFCW joined the National Association for the Advancement of Colored People (NAACP)’s suit, along with the American Federation of Teachers (AFT), as co-plaintiffs against President Trump, Attorney General Jefferson Sessions, DHS Secretary Elaine Duke, U.S. Citizenship and Immigration Services, U.S. Immigration and Customs Enforcement and the Department of Homeland Security in September 2017.

“Protecting people who’ve earned the right to live here is what DACA is truly about. Ending DACA was always the wrong choice to make for our communities, workplaces, and neighborhoods.

“Today’s decision shows how important it is to stand up and fight for millions of young people and their families who make this country better every day.

“Our union family will not rest until Congress delivers a bipartisan, sensible legislative fix to end this nightmare of uncertainty for DACA recipients and TPS holders.”