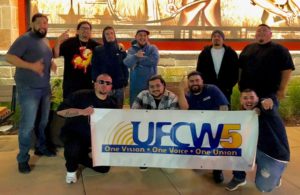 On April 2, 38 workers at Cypress Manufacturing Company in Salinas, California, joined UFCW Local 5. The facility is part of Altai Brands and the workers produce a variety of edible cannabis products. Indus Holding Company is the parent company of Altai Brands.

The cannabis processing workers joined UFCW Local 5 for a voice in the workplace. “They complained about a list of broken promises around basic issues like regular wage increases and evaluations – but want they really want is respect,” said Union Representative Efrain Aguilera.

Long known as the “nation’s salad bowl,” the Salinas Valley agriculture industry is in transition as traditional crops, particularly flowers, are replaced by more profitable cannabis plants. The area is home to nearly 100 cannabis-related companies, which employ thousands of workers.

UFCW Local 5 was one of the first unions in the country to organize workers in the cannabis industry, focusing initially on Bay Area medical marijuana dispensaries before legalization for recreational use in California was approved by voters in 2016. UFCW Local 5 continues to focus on dispensaries, manufacturing facilities, and workers who grow and harvest cannabis, including a current campaign with Indus/Cypress field workers covered by the Agricultural Labor Relations Act.

As the industry grows so will UFCW Local 5’s effort to organize workers “from seed to sale,” said Aguilera.