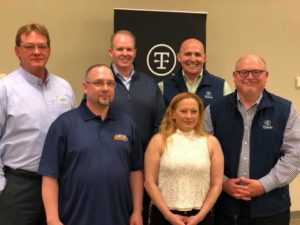 On April 5, the UFCW and Tyson Foods, Inc. announced plans to expand their collaborative workplace safety efforts in the company’s poultry plants. The announcement took place at Tyson Foods Fresh Meats Division headquarters in Dakota Dunes, South Dakota, and commemorated the 30-year partnership between the UFCW and Tyson Foods of working together for safer workplaces. The UFCW currently represents more than 24,000 people employed by Tyson Foods.

The three decades-long partnership began in 1988, with the launch of a landmark ergonomics program and has evolved to include improvements that have helped reduce workplace injuries and illnesses. While the primary focus has been Tyson Foods’ beef and pork operations, it is now being expanded to the company’s poultry business, which has been accelerating its workplace safety efforts in recent years.

“We value the progress we’ve made at Tyson and are looking forward to expanding our partnership to create safer workplaces for all of their hard-working men and women,” said Mark Lauritsen, director of the UFCW’s Food Processing, Packing and Manufacturing Division. “Working together with Tyson has meant empowering workers and their union to make a better, safer workplace.”

“We’re proud of the progress we’ve made through our collaboration with the UFCW, and especially the active involvement of frontline team members,” said Steve Stouffer, president of Tyson Fresh Meats. “We know that all of us must remain diligent if we’re to achieve additional improvements.”

“We’ve worked hard over the years to create a culture where everyone is comfortable to speak up about safety issues,” said Sherry Louk, a nine-year Tyson Foods veteran and safety captain at the plant in Perry, Iowa. “Because we all want the safest workplace possible, there is an environment of empowerment where we can be honest about safety concerns and fix them before somebody gets hurt. At Tyson, I can say ‘I’ve got your back’ because the company and the union have mine.”

“We value our frontline team members who are crucial to the continued success of our poultry businesses,” said Doug Ramsey, group president of poultry, Tyson Foods. “While we have existing programs to help train and protect our people and give them a voice in the workplace, we look forward to working more closely with the UFCW on additional ways we can improve.”